The Junior Squad at Guildford Rowing Club is an energetic and significant part (with approximately 100 members) of the Club. Juniors range in age from 12 to 18. Junior racing categories (J12, J13, …) are based on the academic year, with age on 1 September prior to the race defining the junior age group, e.g if someone is 14¾ on 1/9/2013 they will be J15 for boys or WJ15 for girls during the 2013-2013 academic year. We try to ensure that we are able to boat at least a quadruple scull (“quad”) for each age group with the ability to select a crew. 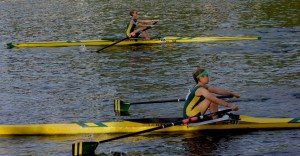 The club usually runs a junior beginners class each September on Saturday afternoons for approximately six weeks. Those beginners then move to the junior training schedule, with progressively more training opportunities as the athletes gain experience and move from one age group to the next. The older and more capable juniors also learn sweep rowing (single oar).

The junior squads are divided into three groups, Progressive, Development and Racing. They train on the River Wey on Sunday mornings, with the racing squad having an additional outing on Saturday afternoons. Land training sessions are arranged during the week. After school outings are organised when daylight permits.

Juniors learn the basics of sculling (safety, boat handling and technique) during the beginners course and then progress to a higher standard within the Progressive squad. Movement to the Development squad follows with the requirement of higher technical ability and effort. The Racing squad is the final step for those with demonstrated commitment, fitness and technique to compete on a regular basis at some of the larger events, typically on the River Thames.

Many of the coaches are parents or former parents, with additional coaching assistance provided by experienced juniors and parents alike. Many juniors use coaching or sculling as part of their Duke of Edinburgh’s award. Parents frequently lend a hand in ways other than coaching, some help with safety on the river bank (we’ll train you to use a throw bag), club events (summer party, BBQs, scratch club regatta), regattas (summer sprints), heads (winter time trials) and equipment maintenance (boats and boat house).

Following a sculling test, we do occasionally accept scullers from other clubs into the squad where a gap exists in the age structure for a particular age group.

We use cookies to ensure that we give you the best experience on our website. If you continue to use this site we will assume that you are happy with it.OkPrivacy policy